Muzzin skates alongside Rielly in 1st practice with Leafs

Newly acquired defenceman Jake Muzzin skated alongside Morgan Rielly during his first practice with the Toronto Maple Leafs on Thursday.

Toronto shipped two prospects and the team’s first-round pick in the 2019 NHL draft to the Los Angeles Kings in Monday’s trade for Muzzin.

The six-foot-three, 213-pound native of Woodstock, Ont., played on the left side with Rielly as the Leafs’ No. 1 blue-line pair in Toronto’s first on-ice session following the all-star break and its league-mandated bye week.

“It was a good pace,” Muzzin told reporters. “For not skating for a long time and hop into that, it was a good change.

“This is new for me. I’ve never been traded, but to be traded to a team like this with some really good players, I’m hoping [the transition] is easy.”

“A lot of skill, a lot of speed so it was an exciting practice.”

Jake Muzzin discusses his first practice with the Leafs this afternoon. #LeafsForever pic.twitter.com/RYpaeWQMlC

Set to turn 30 on Feb. 21, it’s hoped Muzzin will provide skill, leadership and grit to a defence corps previously viewed as the weak link of a team hoping for a long playoff run this spring.

“I’m just going to come in and be myself. That’s all I can be,” Muzzin said. “If there’s certain situations where I see something that I’ve experienced or can correct … then I’ll say something.

“But I’m learning, too. I’m coming into a new situation, so I’m going to have to be taught some stuff.”

Muzzin, who along with Rielly shoots left, has played almost exclusively on his natural side throughout his career, and would prefer it stayed that way in Toronto.

“We’ll see what’s in store for us,” he said. “But if that’s the way it goes then that will be a little bit more comfortable.”

Veteran defenceman Ron Hainsey, who has skated alongside Rielly most of the last two seasons, was on the third pair with rookie Travis Dermott at Thursday’s practice. 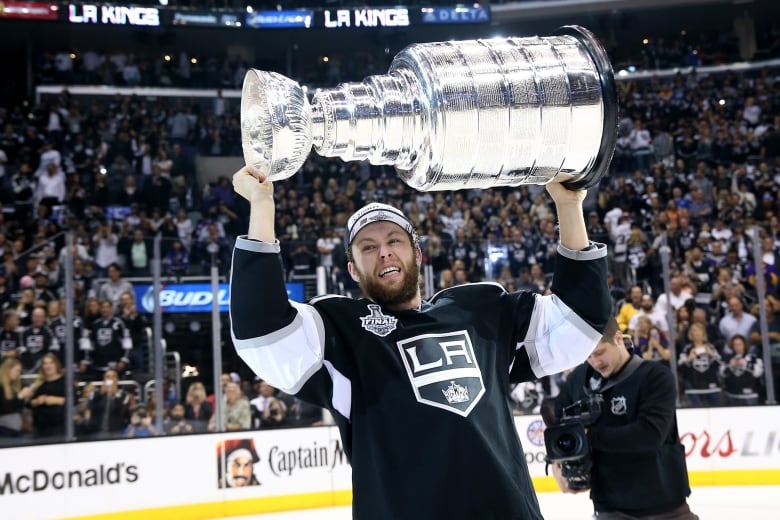 Absent from the last two games because of back spasms, Jake Gardiner remained with Nikita Zaitsev as the second pair.

The Leafs, who entered Thursday’s action a point up on the Montreal Canadiens and two ahead of the Boston Bruins for second place in the Atlantic Division, visit the Detroit Red Wings on Friday before hosting the Pittsburgh Penguins on Saturday.

Muzzin played for Leafs head coach Mike Babcock at the 2016 World Cup of Hockey on a roster that included Toronto centre John Tavares, and has only just begun to get acclimatized to his new surroundings.

“It’s kind of been a whirlwind of information,” said Muzzin, who is signed through next season with a reasonable salary cap hit of $4 million US. “Hopefully over the next couple weeks everything settles down a little bit.”

And while it will take some time getting to know everyone on a personal level, Muzzin played Toronto twice already this season — games that ended in 4-1 and 5-1 defeats for his Kings.