When the Orpheus drone emerged from the waters off of Cape Cod in September 2018, deep sea biologist Tim Shank felt relieved. Four and a half years earlier, Shank, a scientist at the Woods Hole Oceanographic Institution (WHOI), had sent a state-of-the-art exploration craft to crushing ocean depths — but the vehicle never returned.

Only shattered pieces of plastic drifted back up to the surface world.

This time, the new exploration robot Orpheus passed its first test: The machine dove alone into the darkened sea for an hour, without any human control. Critically, the drone came back. Enthusiastic about Orpheus’ return, Shank said he fired off an email to his ocean exploration colleague, the filmmaker and deep sea explorer James Cameron.

Scientists from NASA’s Jet Propulsion Laboratory and the Woods Hole Oceanographic Institution (WHOI) collaborated to build Orpheus, a small, autonomous robot capable of exploring the deepest, uncharted realms in the ocean — and possibly one day exploring extraterrestrial ocean worlds in our solar system, like the moons Europa and Enceladus.

In these far-off realms, without a tether linking the robot to humans above, such a craft must be able to explore, map, and photograph these worlds on its own, without a human at the controls. “You let it go and let it run its course,” John Leichty, a NASA robotics engineer, said in an interview.

NASA and Woods Hole’s greater scheme is not just to have a single Orpheus capable of visiting uncharted waters, but to have a fleet of them scouring the deep ocean like a school of inquisitive sharks. 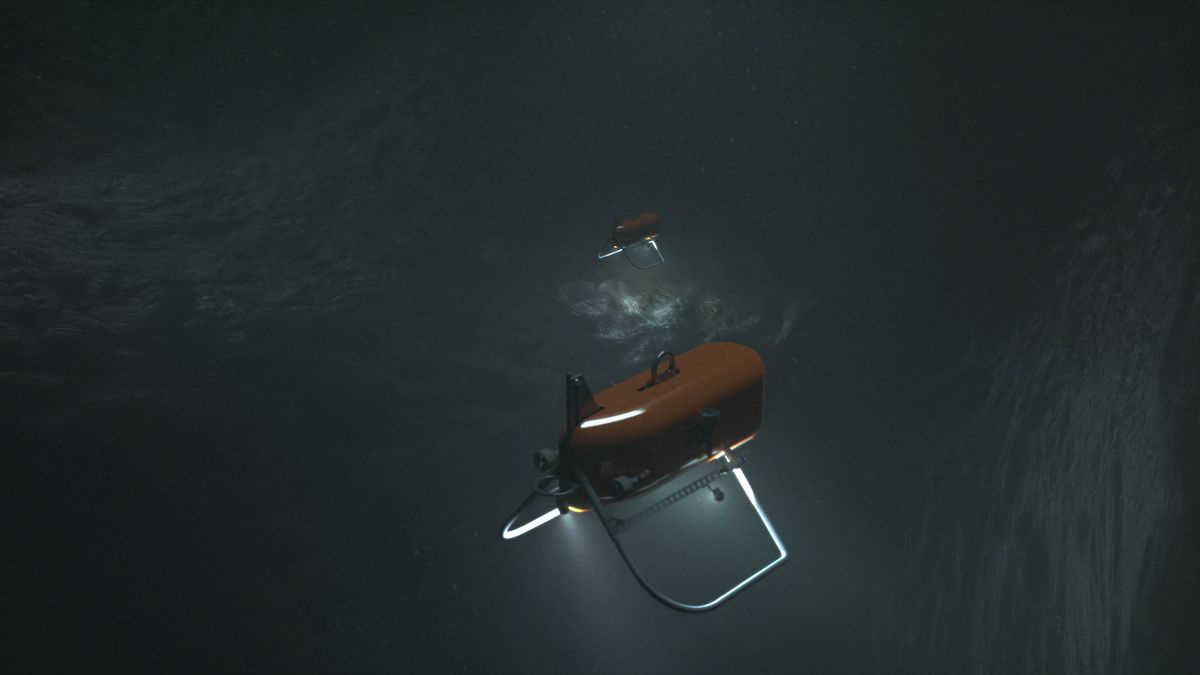 A graphic of two Orpheus drones exploring the ocean.

“We have some fundamental questions about who lives there,” said Shank. “It truly is an alien world on a non-alien world.”

These uncharted regions are located within the ocean’s dark trenches and compose large swaths of the deep central Pacific Ocean.

“We have some fundamental questions about who lives there.”

“This is an area over half the size of Australia that we haven’t explored yet,” said Shank.

During Orpheus’ first run in the fall of 2018, the OceanX exploration vessel Alucia left Woods Hole and traveled to waters off of Cape Cod. There, crew members lowered the drone into the water before releasing the tether, allowing Orpheus — which is not yet capable of exploring with complete autonomy — to follow a preprogrammed route some 570 feet under the ocean.

These ocean endeavors, especially with large vessels like the Alucia, aren’t cheap. For the next four years, OceanX and the charity Bloomberg Philanthropies have committed $185 million to Orpheus’ research missions, and others.

Acknowledging that deep sea endeavors are often hampered by funding, Orpheus’ engineers intentionally kept the craft small. It measures five feet long and weighs in at around 550 pounds. In contrast, many traditional robotic exploration craft, commonly known as ROVs, are around the size of a Volkswagen station wagon, noted Shank. “They’re quite massive,” he said.

Building a smaller ocean exploration vehicle is cheaper, easier, and doesn’t require a massive ship, explained NASA’s Leichty. And for oceans beyond Earth, smaller robots are easier to blast into space. 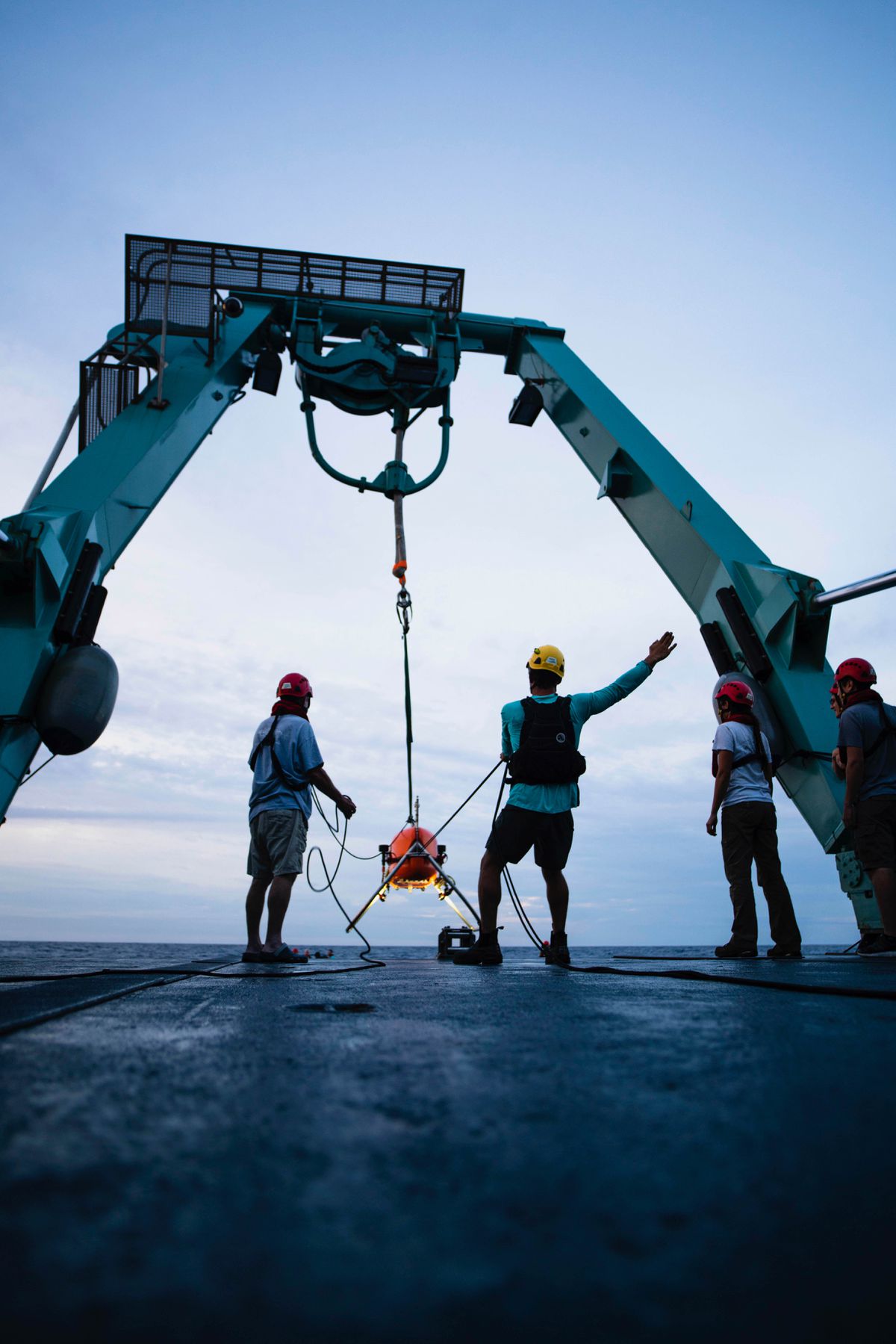 The OceanX crew launching Orpheus into the Atlantic Ocean.

A cash-sensible solution, then, for both trips into the most remote realms on Earth and beyond, is essential. Although the hadal zone covers a significant swath of the planet, it remains a largely mysterious place. Below depths of 6,000 meters, or 20,000 feet, life is different. Shank describes 6,000 meters as a boundary where a great, sudden change in species occurs thanks to the crushing pressure, a pressure he described as 16,747 airliners plopped on top of a dime.

“There’s a biology there that’s separate from the rest of the ocean and we want to get there.”

“There’s a biology there that’s separate from the rest of the ocean and we want to get there,” said Shank.

Though the hadal zone is inhospitable to most life on Earth, critters there flourish. Shank said that if he lowered a 20-pound mackerel down to these depths, the life teeming in the dark would simply devour the fish over the course of hours. “There would be nothing but bones left,” he said.

Orpheus has yet to enter the hadal zone, but the robot’s small, nimble frame is designed to survive the pressure here, unlike most ROVs. “The pressures get so great that a normal ROV will collapse,” noted Shank.

And unlike other robotic explorers, Orpheus is designed to land on the deepest ocean floor, 36,000 feet down, to sift through the alien ground, gather samples, and carry them back up to the surface.

There’s no doubt that our deepest ocean depths are largely uncharted realms.

“We know the surface of the moon better than we know the bottom of our oceans,” said Andrew Dombard in an interview, a planetary scientist at the University of Illinois at Chicago who has no involvement with the Orpheus project.

The Orpheus drones will change that, noted Wood Hole’s Shank. But visiting oceans beyond Earth is, as one might expect, a significantly more ambitious, long-term goal.

“The challenges are many and are extreme,” said Dombard, who has studied ways to bore through the 15-mile thick ice shell surrounding Europa, Jupiter’s fourth-largest moon. 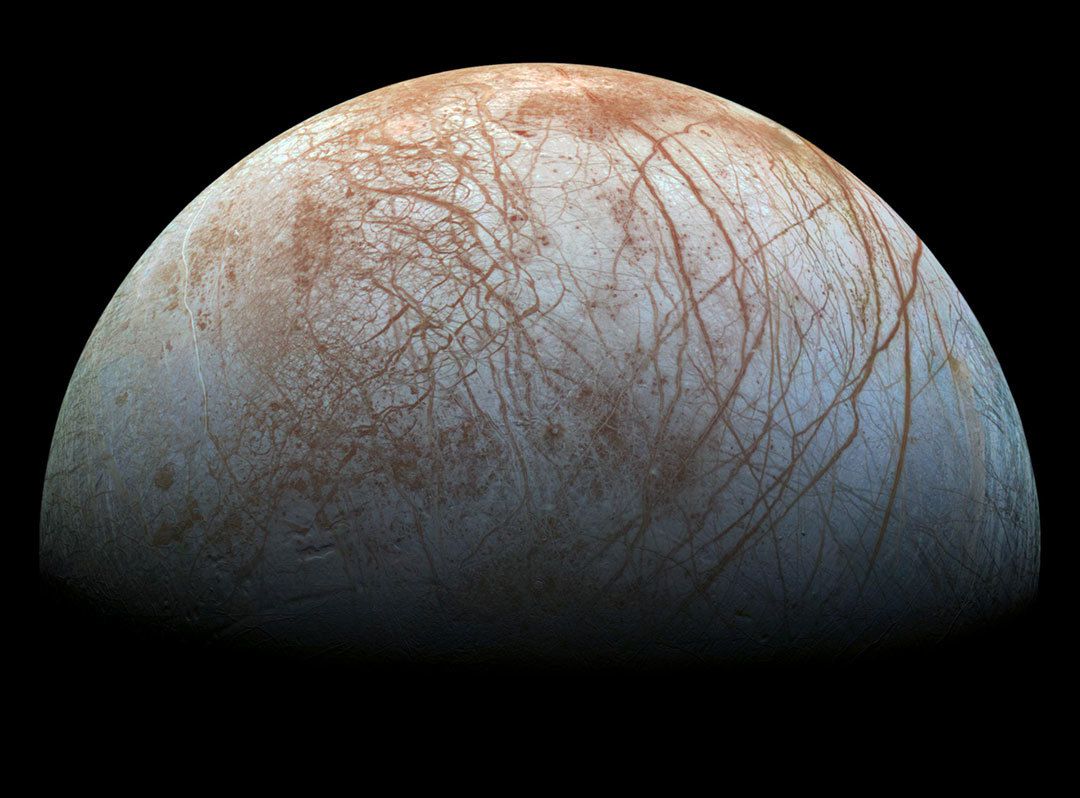 One of the greatest challenges is powering the extraterrestrial ocean probe, said Dombard. On Earth, Orpheus can get by with batteries, but that won’t cut it on an alien planet, where batteries can’t be recharged. Nuclear power might do the trick, he said, but that means building a drone that can manage the radiation and excessive heat produced by nuclear reactions.

Then, there’s the terrible pressure. On Europa — if a space probe ever found a way to bore through the moon’s robust icy crust — the drone might have to descend 100 miles beneath the sea to reach the ocean floor. “You’re dealing with pressures that are far worse than what you’re dealing with on Earth,” Dombard explained. Though he noted that pressures on Saturn’s smaller moon Enceladus would be less, so it might be better-suited for an ocean exploration mission.

Orpheus’ training to become mostly autonomous has started, and in the next couple of years the machine will employ image-recognition technology — like that increasingly employed by cars — to identify objects and critters, said Shank.

“On Europa having that autonomous decision-making will be key,” said NASA’s Leichty. 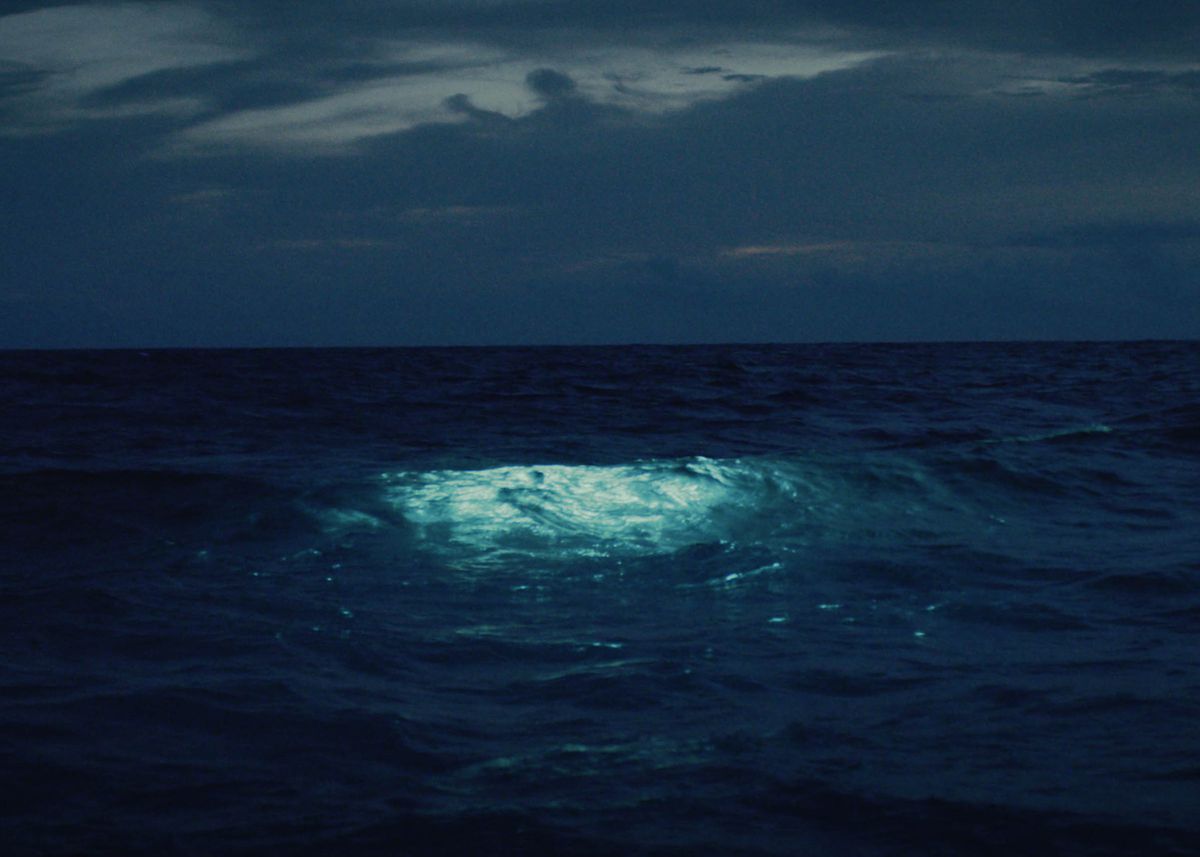 Orpheus illuminates the water as it ascends to the surface.

In the end, perhaps the greatest challenge to exploring Europa’s seas isn’t technical.

“I have learned over my career to never underestimate the ideas these engineers come up with,” said Dombard. “I think that these are solvable problems but it requires money, and right now it may require too much money.”

NASA’s budget is already strained, with its expensive mega-rocket — which is still years from a test — sapping the $19 billion budget. The space agency, however, does have plans to launch its Europa Clipper spacecraft to the ocean world as soon as 2023. The Europa probe will swoop by the moon’s surface and assess the likelihood that it could support life.

For now, Dombard said he’s pleased to know that a fleet of Orpheus drones may soon dive down to the alien realms on our own planet. Anything more would be an added benefit.

“Exploring Enceladus and Europa would certainly be gravy,” he said.