While we wait for hoops, take some time to appreciate the defending champs

It was one thing to see the love fest that engulfed Kawhi Leonard in the wake of the Raptors’ first-ever NBA title in June. It was another thing to live it.

Royce Lando knew for a few years that he resembled Leonard, who was then the Raptors’ low key, high result forward that had just won his second NBA Finals MVP. When he stepped off of the GO Train on June 14 from his home in Oakville, Ont. into downtown Toronto, he didn’t think he’d be as convincing as he was.

Wearing a black Raptors’ Leonard jersey, matching shorts and a pair of white tights underneath, Lando made his way through the parade route, mingling with pieces of a crowd estimated to be near the 2 million mark.

“I was actually shocked,” Lando said this week, taking a break from final exam prep. The 21-year-old is in his third year of a computer science degree at Brock University.

“I was shocked. Moms were giving me their babies. I was taking pictures with families, signing autographs.”

Lando had the basic Kawhi mannerisms down. After a year of seeing Leonard under the microscope that charted his pending free-agency, Lando said it wasn’t hard to duplicate. He walked through the crowd dropping a subdued hey-hey-hey a good four months before Leonard would have the same clip go viral on the NBA’s opening night. He’d casually slide into that strained laugh as he signed t-shirts, complete with straight-faced drawings — “I don’t smile, so…” — and the thousands that surrounded him all day ate it up.

“You had a whole community of people, everyone…a lot of people showed up downtown super early and everyone was just having a good time.

“Then just seeing the fans cheer. To look at it through I guess the athlete’s point of view was pretty cool. Everyone was so thankful for what you’d done for the city and bringing a championship.

“It was pretty amazing. And then just the chants. Everyone is chanting your name, ‘MVP.’ I didn’t realize how impactful the MVP chants are. You really feel like an MVP when they start chanting it.” 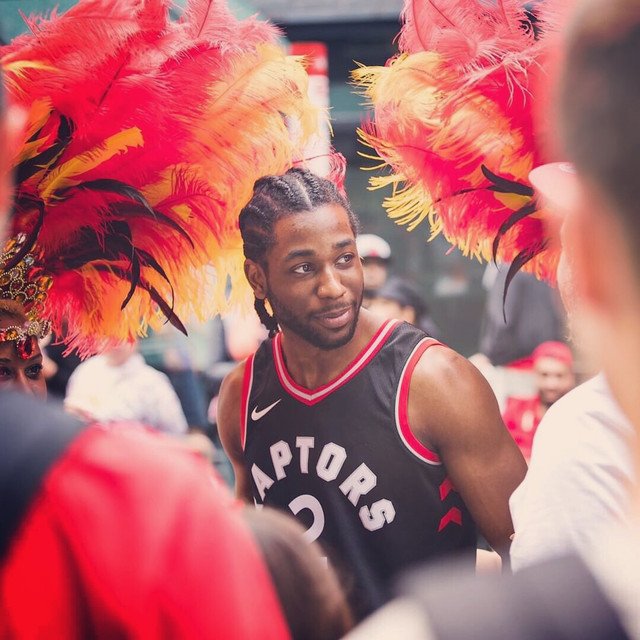 On Wednesday, Kawhi Leonard will set foot on the court at Scotiabank Arena for the first time since the NBA Finals. It will be his first time playing in Toronto as a visitor, just six months after he took the Raptors to the top of the NBA and was the subject of those MVP chants.

It was so much easier before this one.

Raptors fans have been here before, in a sense. They’ve seen the star player leave their team, their city for pastures of varying shades of green. Each one up to this point — Damon Stoudamire, Tracy McGrady, Vince Carter, Chris Bosh — provided simple enough paths to channel the anger, the disappointment, the hurt.

It was simple then, so straightforward. The star player left and when they come back, the vitriol of an arena full of fans awaited them (to varying degrees of justification, perhaps, but that’s beside the point right now). Some have wilted under that chilly welcome, the boos-per-touch getting the best of them. Others…have thrived. Regardless of the outcome, fans knew how to approach these games.

As familiar as it will be, Wednesday night will also be unlike anything the Toronto Raptors franchise has seen in its 25 years of existence. With Kawhi Leonard and Toronto, it feels like everything is always destined to be different.

As the Raptors and the 76ers marched their way to the end of regulation in Game 7, Tresor Gray was equal parts fixated on an iPhone and his data bill.

The 24-year-old was on a bus in West Virginia with friends, watching as Leonard’s shot bounced (and bounced and bounced and bounced) around on the rim before sitting and falling, the NBA’s first-ever Game 7 buzzer beater. History was made and the basketball world erupted in celebration.

Having just graduated from the University of Guelph-Humber, Gray was out of the country for much of the Raptors’ playoff run. A YouTube personality and a burgeoning actor, he was hosting a graduation trip in the Bahamas when the Raptors were in the Finals. As the Raptors inched closer to their first championship, he saw Scarborough musician General Genius’ Raptor Foot video and found inspiration. He remixed the already popular clip, giving it a dancehall sound, worked name drops of Raptors players and global ambassador Drake into it and it went viral.

“I feel like if the Raptors didn’t win it probably would have had a buzz but the song did so well I think because it was more celebratory that we actually won,” Gray said.

Gray was still in the Bahamas while the video took off. He was getting texts and calls from friends that were telling him about the attention it was getting, being played on TV shows and on the radio.

“Looking from the outside it was pretty wild to see but I do wish that I was around more to experience it,” he said.

He got back to Toronto on June 13, the night before the parade. Back home for the biggest single day of celebration in the team’s history, he heard his song played in crowds and basked in the team’s accomplishment.

“It was wild because no one thought they were going to get that far, I think,” he said.

“It was a really historic playoff run in general. They really took Toronto to another level.”

In May, OD Toronto had just opened on Queen St. and wanted to make a splash.

The consignment sneaker shop saw what the Raptors were doing and as longtime fans of the team, knew what they had to do. Their massive, 30-foot mural of Leonard was on the front of the building by May 8. As the playoffs progressed, the murals did too. It was modified to Leonard’s follow through on The Shot after Game 7, then shifted to a team photo, complete with Drake in the background, as they went into the Finals.

“We had just opened up at the time and we wanted to use this shop to just do stuff for the city, local artists, local talent,” store co-owner Shahin Shamshiri said.

“It was perfect timing.”

Instantly, picture-takers lined the area around the store for weeks. For Shamshiri, it was the melding of two of his passions.

“Growing up, that was our team,” he said of the Raptors.

“I’m an immigrant. I came here from Iran when I was one. Basketball was always the thing. Toronto being so multicultural, it was always Toronto’s team.

“This playoff run brought everybody together. Toronto’s a great city. We (didn’t) really have that NBA championship team, so to get it and to see the whole city come together, we were celebrating like it was Christmas. It felt like Christmas. Everyone was in a good mood. It was nice to see that.”

So, six months after a playoff run that brought a city and a country together, what do you do with Wednesday night? There’s still disappointment that Leonard left, that he opted not to play MJ to Pascal Siakam’s Scottie Pippen, that the city lost a year of Drake’s Back to Back pumping through Scotiabank Arena’s speakers.

If it were anyone else that had left, the answer might be obvious, or inevitable. But with Kawhi and Toronto it’s always different.

“He came in one year and we won a championship. Obviously a lot of people wanted him to stay, but I didn’t really see a whole we-hate-Kawhi type of thing. I think it’s more that people were hurt that he didn’t stay, but it’s like, ‘OK, we won a championship so we’ve got to at least give that to him. I think he’s going to get a good reception.”

“I think for the most part, it’ll be good,” Royce said.

“Even though he left and he didn’t give us a chance to repeat, we still recognize that without him it would have been very hard to win a championship.

“I think most people will give him a good reception. Everyone should cheer. I don’t think anyone will boo him. I hope not.”

“They’ll cheer for him, for sure,” Shamshiri said.

“We don’t like him in that sense anymore. But in the moment with the lights up, the Raptors giving him the ring; he earned that ring. We’re going to cheer, for sure. Maybe during the game we won’t cheer anymore. But before the game, we have a lot of respect to pay.”

So many times in his year in Toronto, all eyes would shift to Kawhi in a dire moment. We’d look to him for an answer, for guidance, for a miracle. He’s different because when it mattered the most, he delivered.

He told his teammates when they were trailing in Game 5 of the Eastern Conference Finals to Milwaukee to take it all in, to enjoy the moment. He’d say the same to fans at the parade on that hot mid-June day. Enjoy this, enjoy the moment. Fans should do the same on Wednesday night.

One thing will make that moment even more enjoyable.

“I hope he plays,” Royce said. “I don’t want to hear anything about load management. I want to beat him.” 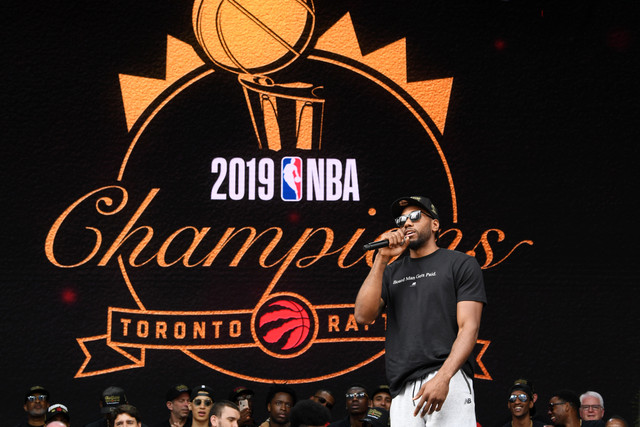